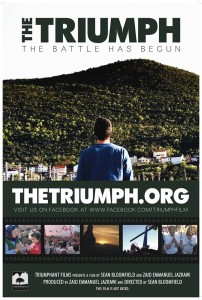 What a wonderful night of inspiration and fellowship! We had a fantastic crowd of 350 people attending two “sold-out” screenings of “The Triumph” at Plaza Frontenac on November 13th in St. Louis.

The crowd  from all over the metropolitan area was not disappointed with the movie, which was primarily filmed in the tiny village of Medjugorje, Bosnia-Herzegovina.  The inspirational film includes both a warning as well as a powerful message of hope to the world.   Since its premiere on March 18 earlier this year, “The Triumph” has been seen by thousands across the United States.

The evening was made even more special by the attendance of “The Triumph” Producer Zaid Jazrawi who flew to St. Louis to meet the crowd and thank them personally for their support.

Many viewers expressed how appreciative they were to be able to attend such an inspirational production.  The powerful film deeply touched many moviegoers with one fan commenting “Graces were coming out from the movie.”

If you missed the screening or would like to relive the experience at home, we’ve been informed by Zaid that a local St. Louis firm will be creating DVDs of “The Triumph” for purchase in the January time-frame.  When we learn more about the availability we’ll post an update on this site or if you’d like to be notified, please complete our “Contact Us” form.

If you attended our event it would be great to hear your feedback…you can enter your comments below in the text box or click here to leave your comments.

We wish to extend our heartfelt thanks and God’s blessings to everyone who supported our event!

Through prayer and guidance of the Holy Spirit, the Blessed Anne Catherine Emmerich Foundation provides educational and spiritual speakers to grow and strengthen the Catholic faith.

The Blessed Anne Catherine Emmerich Foundation is a nonprofit organization incorporated on September 8, 2004.

To make a Donation to BACE: